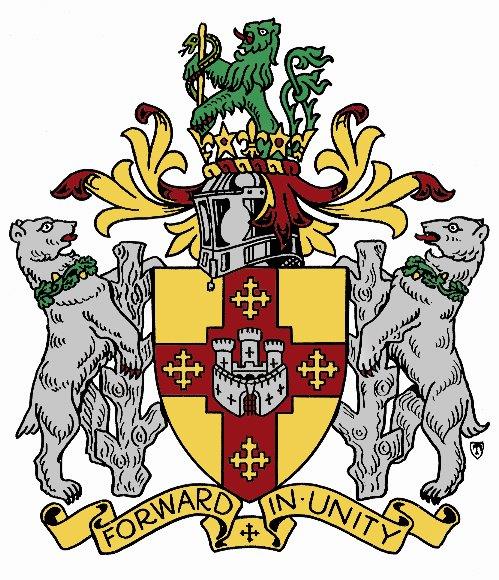 Or on a cross quadrate gules a castle of three towers within a circular wall in perspective pierced by a port with portcullis argent, between four cross crosslets or.

On a wreath of the colours, within a circlet of four fleurs de lys and four mullets or pierced gules alternately a demi lion queue-fourchee vert supporting a rod of Esculapius proper.

On either side a bear supporting a ragged staff argent and gorged with a wreath of oak fructed proper.

The design comprises shield, crest, supporters and motto. The shield symbolizes four Warwickshire authorities combined in one named after Warwick, the crest alludes especially to Kenilworth and Leamington Spa, and the supporters to the two Warwicks.

The shield in gold, with a red plain cross, squared in the middle, having on each limb a crosslet from the arms of the Beauchamp Earls of Warwick. Three of these are seen, red on gold, in the County arms. Here, they are restored to their original colour, gold on red. These signify the four Warwickshire areas now combined under the name WaNdick, which is represented by a three-towered castle encircled by a wall, derived from the former Warwick Borough arms. The castle and wall are in white, as in the former Warwick Borough arms, now transferred to the Warwick Town Council. Above the shield is the closed helm proper to civic arms, with its crest-wreath and decorative mantling in the red and gold of the shield. The crest has at the base a circlet of alternate fleurs de lys and pierced "mullets", or five-pointed stars. These are emblems of the Clinton family seen respectively in the Leamington and Kenilworth arms. Rising from the circlet is the green double-tailed lion of the Dudleys, common to both these arms, he supports the Esculapian rod, symbol of healing, which in the Leamington crest alludes to the properties of the Spa.

The supporters are the Bear and Ragged Staff, the time-honoured device of the Earls of Warwick, long associated with the County and Warwick itself, and seen in various forms in many of the County's civic arms. It was the crest of the former Borough of Warwick and the device of the Warwick Rural District Council, as well as being the main charge in the County arms. In the former borough crest, the bear and staff are shown in black to match the shield, and without the muzzle, collar and chain which usually accompany them. As the personal badge of the Beauchamps, they were displayed as "argent", and they are shown white in the new arms, and without the muzzle and chain, to emphasise the freedom of the inhabitants to speak and act. A distinctive addition is the collar of oak, suggested by the tree in the Rural District Council device, an allusion to the Forest of Arden. This effectively distinguishes these supporters from all other bears and ragged staves in civic heraldry.

The motto, a local suggestion, is "Forward in Unity".

The arms are designed by H. Ellis Tomlinson, M.A., F.H.S., and Chris J. Smith, member of the Heraldry Society, who were responsible for the former Kenilworth Urban District Council Arms, now borne by the Town Council.