The University of Warwick has continued to strengthen its position as a leader in esports, showing the sector’s impact on the local economy with the success of the region’s CultureFest 2022.

Throughout August, the University’s Esports Centre, the first of its kind at a Russell Group University and part of a broader video games ecosystem in the region, aptly named ‘Silicon Spa’ in Leamington Spa, curated activity for Warwick District Council’s CultureFest 2022. 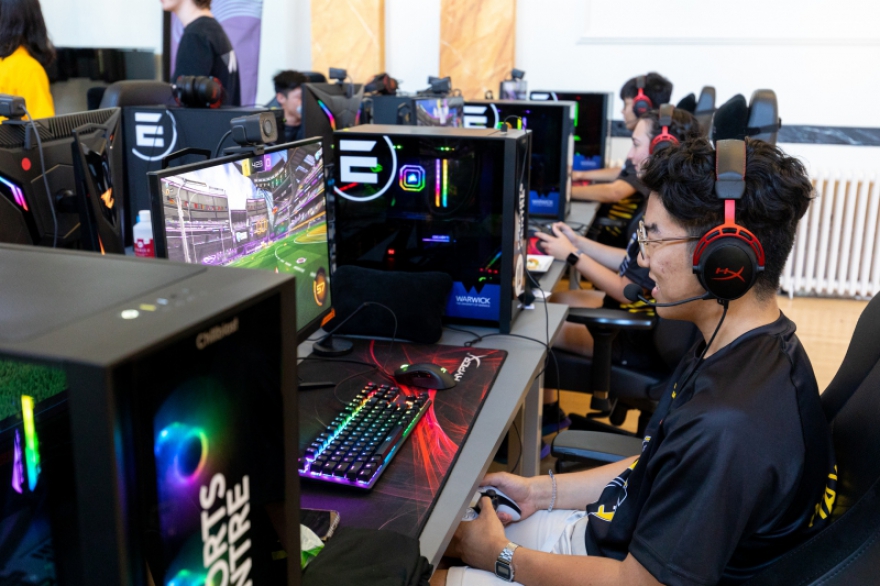 The ten-day event, Race to the Finish, was created by the Creative Futures team within the University and attracted over 500 visitors to the region, as visitors discovered more about the new gaming experiences created by the region’s emerging talent.

Warwickshire is home to the second largest cluster of games development companies in the UK outside of London and plays host to a number of major computer games studios, including EA, Ubisoft Reflections, Playground Games, SEGA HARDlight, and Sumo Digital. 50 of these active game’s companies are based in Coventry & Warwickshire, with two-thirds base in and around Leamington, one-third in Coventry, and a further 80 in the wider West Midlands area.

A high proportion of these companies in Leamington are high growth, generating a one million turnover within 3 years of trading and growing at 20%+ per annum, with a significant minority turning over more than five million.

The sector’s success in the region has been recognised by Andy Street, Mayor of the West Midlands, who has committed to supporting the games cluster and boosting the development of the esports sector by securing major esports tournaments in the region and encouraging the relocation of industry bodies, including the UK Esports Association.

"We were delighted to be involved with the Esports event at The Pump Rooms in Royal Leamington Spa as part of CultureFest, which has hosted a brilliant range of creative events and activities in the District this summer.

"At the Esports event, I was pleased to see so many families, children and young people participating in the activities, learning more about the gaming sector and career and educational opportunities.

“The District Council will be hosting its popular Interactive Futures Event again next year where those with a keen interest in this sector will be able to find out more about local Game developers in the district.”

Visitors to CultureFest 2022 enjoyed eight events hosted by the Esports Centre, including a Trackmania Time Trial, hands-on STEM workshops for children run by the British Motor Museum and talks with industry experts across the computer games sector.

The Centre also welcomed 14 guest speakers from across the creative technology industry, including Game Designer and British rally driver Jon Armstrong, who won the esports World Rally Champion in 2018, and who attended on the same day as the original rally winning Mini Cooper, which was on loan from the British Motor Museum’s private collection in Gaydon.

Since its launch, the Esports Centre has welcomed over 3,000 visitors through its doors through a series of play sessions, events, tournaments and birthday parties. The team is committed to developing the sector’s upcoming talent in the region and making esports more accessible. In addition to creating 13 student jobs, the Centre has enrolled 766 young people onto its esports learning programmes since 2021. It has also secured over £155,000 in grant funding and sponsorships.

The youth programmes, created in collaboration with Warwickshire County Council over the past year, the University targeted different age groups, including those aged 16-24 who are unemployed and children aged 14 years old in year eight. Both programmes focus on using esports to teach essential skills such as teamwork, communication and content creation with the aim to inspire young people to pursue a career in the sector by illustrating the opportunities offered in the creative and digital world.

Passionate about nurturing a love of playing games among the next generation from an early age, the University also hosts after school clubs for 9- to 13-year-olds in partnership with Coventry City Football Club and their charitable arm, Sky Blues in the Community.

The Esports Centre has also developed a pack of learning resources and activities for teachers working in KS3. These lesson plans were developed for Warwick County Council’s secondary schools but are available for any teacher to access online. Each activity is directly linked to the curriculum and encourages students across the region to develop digital skills and consider the variety of careers in esports.

Jack Fenton, Head of Esports at the University of Warwick, said:

“As the esports industry continues to grow, it’s important for us to encourage an early interest in the sector among primary and secondary school students, that can inspire career making decisions at higher education level.

“With a reputation for winning UK Esports University of the Year for the last four years, and repeatedly dominating major university tournaments, students of all ages are being attracted to Warwick because of its outstanding facilities, opportunities and strong relationships with the games, esports and wider creative industries.”

Under Creative Futures, which acts as a gateway between the University and the region’s creative industries, the Esports Centre benefits from access and connections with leaders in the video games industry, creating unrivalled opportunities for students to learn from and build relationships with world-leaders many of whom are developing esports titles here such as EA / Codemasters and Ubisoft.

United in their global reputation for being leaders in esports, the partnership will explore how esports can contribute positively to campus experience, student learning and research impact while seeking to offer trans-Atlantic opportunities for students through travel exchanges and joint academic programmes.

“This summer has been a truly fantastic time for Warwick Esports Centre. CultureFest 2022 offered an unmissable opportunity for us to showcase the immersive world of games and esports to the local community and build on our fantastic relationships with our industry partners.

“The esports industry has seen tremendous growth globally over the last few years, with our own home, ‘Silicon Spa’, constantly evolving to grow new opportunities in creative and digital careers not only for students and graduates from universities but also attracting people to our region.

“As we look ahead to the new academic year and into 2023 and beyond, we’re excited to partner with more leaders and businesses across the sector and look forward to the new opportunities these relationships will create.”