The grave of a soldier who was awarded the Victoria Cross and Military Medal for his actions in leading his section on the Western Front during World War I is to be given a military rededication. 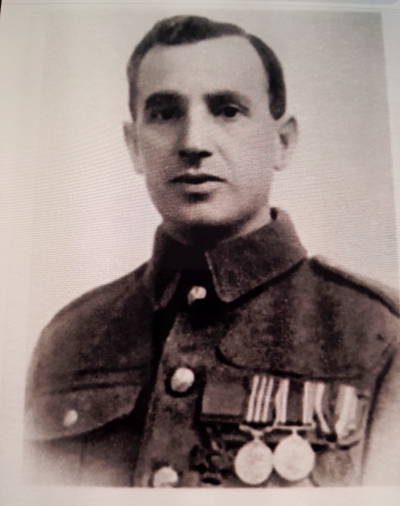 The service for Corporal William Amey VC MM will take place on Sunday 21 August at Leamington Cemetery in the presence of The Right Honourable The Viscount Montgomery, The Lord Lieutenant of Warwickshire, and civic representatives from Warwick District Council, Royal Leamington Spa, Warwick and Whitnash Town Councils.

The ceremony which includes a gunned salute (with blank ammunition) is being organised by The Royal Regiment of Fusiliers, who with support from the Victoria Cross and George Cross Association and Warwick District Council have enabled Corporal Amey’s grave to be restored and obtained permission for the rededication to take place. Research was undertaken by staff from the Fusiliers Museum (Warwickshire) and local veterans of the Warwick and Leamington (FUSILIERS) Branch of the Regimental Association.

Corporal Amey VC MM served with the Royal Warwickshire Regiment during the Great War, and was awarded the Victoria Cross, the highest and most prestigious award for gallantry in the face of the enemy that can be awarded to British and Commonwealth forces.

Following his time in service he lived on Willes Road, Leamington in a house that now bears a Blue Plaque with his name. He died of illness in 1940 and received a Military and Civic Funeral and is buried in Leamington Cemetery, but sadly over the years his grave had fallen into disrepair. Now Corporal Amey’s final resting place is appropriate for such a brave local hero.

Major John Bartlett for The Royal Regiment of Fusiliers said:

To obtain the permission to do the necessary work took a lot of research and investigation, time well spent, because the grave has been returned to its original condition, as befits the holder of a Victoria Cross.”

“William Amey was a modest person who when put to the test in World War 1 showed great bravery and leadership.  His story is inspiring to us all and an encouraging example for today’s youth.”

“Warwick District Council is pleased to have been able to support the restoration and rededication of the grave of a local hero, so that Corporal Amey’s courage and actions at a time of great peril are never forgotten.”

The Military Rededication of the grave of Corporal William Amey takes place in Leamington Cemetery, Whitnash CV31 2EN starting at 11am on Sunday 21 August. The Cemetery is open to the public.