Another milestone to improve active travel in Warwick was reached this week with the opening of an important new cycle link on St Mary’s Lands.

The project which has been managed by Warwick District Council in consultation with Warwickshire County Council and the national cycle network charity Sustrans, has seen the creation of a new traffic free cycle route which connects the racecourse entrance to Linen Street and provides the missing link to existing cycle paths to Aylesford School to the south and the Woodloes to the north.

This scheme forms part of the St Mary’s Lands master plan, started in 2016 and is one of a host of measures to improve the accessibility to the popular sporting and recreational facility.

On Friday 3 September the Mayor of Warwick, Chairman of Warwick District Council and ward Councillors from the Town, County and District Councils joined members of the St Mary’s Lands Working Party to test out the route for themselves, just ahead of the new school year.

“This is a significant part of our plans to not only improve access to St Mary’s Lands, but also to encourage active travel in and around Warwick. We hope that this new route will be well-used, particularly by those living in Chase Meadow, Saltisford and the Woodloes and pupils from Aylesford School.” 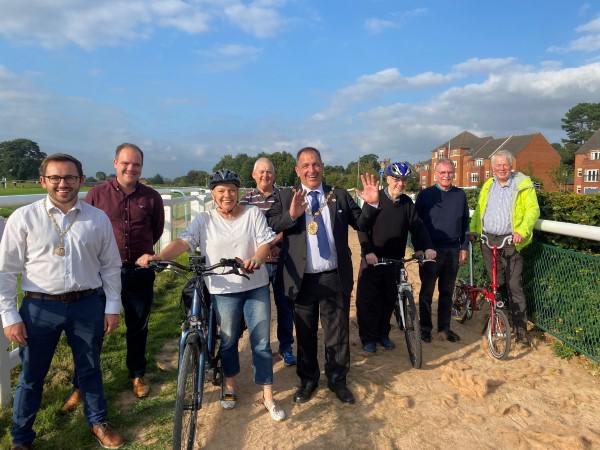