The outdoor gym equipment in Victoria Park is now open for the public to use.

The area near the skate park has been laid with Astro-turf and now features two bicycles, two cross-trainers, parallel bars and pull-up equipment for visitors for the park to use as part of their fitness routine.

“I run three boot camps for between 15 and 30 people every week and also personal training sessions in Victoria Park, so I know that the space will be really well-used,” she said.

“I have already tested out the equipment, and it is great for cardio, body strength and for circuits. I will certainly be using it personally and for the sessions I run.

“It allows people to exercise in the fresh air and for free – what could be better?”

AC Lloyd Homes has recently developed the nearby apartment scheme at Victoria Point and Alistair Clark, managing director of AC Lloyd Homes, said the gym is a great addition to the park.

He said: “It has been fantastic to see so many people visiting the park and taking advantage of the new equipment.

“The pandemic has inspired more people to make fitness a priority and this is the perfect time for equipment of this type to be made available.

“We hope among the new users of the outdoor gym will be residents of our nearby apartments at Victoria Point, with the new gym only strengthening the already excellent range of facilities in walking distance of the apartments.”

Brian Bassett, former President of The Rotary Club of Leamington, added: “It is brilliant the equipment is already being used by so many people. I have been down to use it myself and there were people of all ages having a go which was great.

“Providing facilities for people to exercise outside is helping them keep fit, thereby ultimately saving the NHS expense and also attracting people to the park.

“We would like to thank AC Lloyd for its generous donation which made this project possible.

The outdoor gym is one of many infrastructures and public realm improvement projects being supported by Warwick District Council and the Government’s Local Growth Fund through the Coventry and Warwickshire Local Enterprise Partnership (CWLEP), ahead of the Birmingham 2022 Commonwealth Games.

Councillor Alan Rhead, Warwick District Council’s Portfolio Holder for the Environment & Neighbourhood services, said: “This was a wonderful donation by AC Lloyd and The Rotary Clubs of Royal Leamington Spa and Bruhl, which will help local people take part in an extended range of activities in Victoria Park, giving park users the option to do exercise, that they would have normally done in an indoor gym.

“The outdoor gym is in addition to many upgrades and restoration projects that are currently taking place in the park, such as the upgrading of the children’s play facilities and the resurfacing and widening of footpaths, helping visitors to enjoy this beautiful public space.” 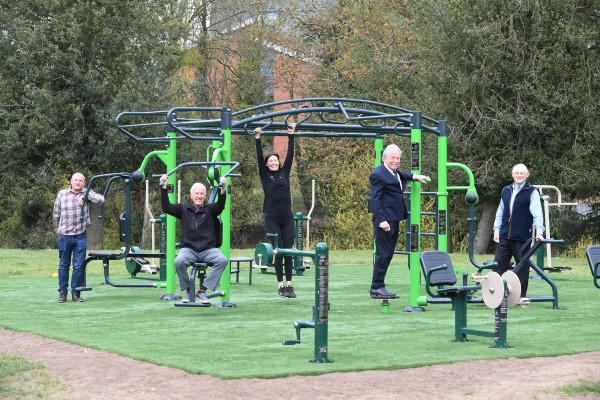