Warwick District Council’s Lifeline team took on a mammoth challenge this week, constructing a paper chain over a 24-hour period that would be big enough to wrap around the outside of Riverside House. 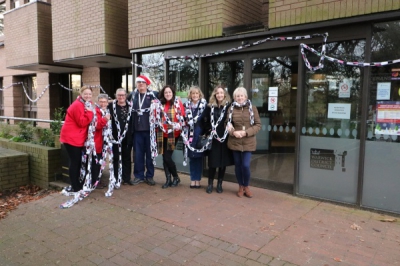 Earlier this year, the Lifeline team lost a much loved colleague, Alan Roddis, to cancer. Alan had worked for Lifeline for over 10 years and was a valued member of the team.

In his memory, they took on this epic fundraising challenge for Myton Hospice: on 17 December, over 24 continuous hours, they constructed the chain whilst delivering their front line service to the most vulnerable in our district.

Bringing the chain to Riverside House on Wednesday 18 December, the team worked quickly to wrap it around the building, with Alan’s partner there to complete the last link in the chain.

Zoe Huckvale, Housing Support and Lifeline Team Leader, said: “As a team, we wanted to do something a little out of the ordinary that Alan would have laughed at, and I think we certainly achieved that.

“Alan would have been the first to avoid having to put the paper chains together. We want to keep his memory alive as we miss him dearly, especially at this time of year.”

The team have raised £240 so far for Myton Hospice by holding a competition for Warwick District Council staff to guess the number of links in the chain.

In total, the chain was 240m long with approximately 4080 individual links.