Plans for a new community football stadium for Leamington Football Club will be proposed to Warwick district’s councillors later this month. 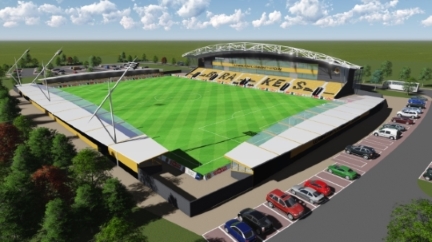 Warwick District’s Full Council meeting on 12th April will be asked to give their approval to purchase the land off Europa Way to allow for the development of the community football stadium. If agreed, the council will undertake a detailed study on the delivery options and feasibility for a new sports and community hub for the area. As well as the stadium this would include a new primary school, community hall and medical centre. Enabling development is envisaged to help fund the community stadium, which could include a new hotel, pub, convenience store, other local shops and some housing. The plans, developed by Leamington FC and the council, would see the construction of a 5000 capacity football stadium with a 3G artificial pitch, conference facilities, a gym, bar, café and community facilities on land adjacent to Europa Way and Gallows Hill. It will provide a much needed new home and asset for Leamington FC located nearer to the town centre and public transport routes.

If the stadium plans are given the go ahead by council members and Leamington FC’s shareholders, part of the scheme would also involve Warwick District Council acquiring Leamington FC’s current site at Harbury Lane, which has been identified by the council as a possible location for a Gypsy and Traveller site. Leamington FC would move from Harbury Lane after the new community football stadium is completed and ready for occupation and use.

Leamington FC’s Chairman, Jim Scott said: "Leamington FC very much welcomes this key step forward. A new stadium with improved access and facilities will help us fulfil our aspirations to move into higher leagues. It will also allow us to develop and expand our presence in the community through our programme of football related activities. This will give more people the opportunity to get involved, be it as a player, spectator or user of the facilities."

The Leader of Warwick District Council, Councillor Andrew Mobbs commented: "I’m delighted that Warwick District Council is looking at the feasibility of such an exciting project. A new stadium and sports hub for our area has the potential to be a new focal point for the community with huge benefits for the health, fitness and well-being of our residents."

Councillor Peter Phillips, Warwick District Council’s portfolio holder for Housing and Property Services added: "We want Warwick district to be a great place to live, work and visit. This very exciting proposal not only has the potential to create much needed housing, but could also bring great benefits to the community. I very much welcome these plans and look forward to presenting this first step at the Full Council meeting."