The Royal Spa Centre is located in the centre of Warwickshire in Royal Leamington Spa.

The Town Hall is located on The Parade in the centre of Royal Leamington Spa.

Royal Leamington Spa is served by an excellent road network, just 10 minutes from the M40, and within easy reach of Birmingham, Coventry, Leicester, Banbury, Oxford and Rugby. The Royal Spa Centre is signposted from most roads surrounding the town centre. Follow directions for car park P7.

Royal Leamington Spa railway station is just a 5-10 minute walk from the town centre, with fast, regular services to Coventry and Birmingham. There is a Chiltern Railways connection to London, and Virgin Cross-Country service. For timetable information visit www.nationalrail.co.uk or www.trainline.co.uk. 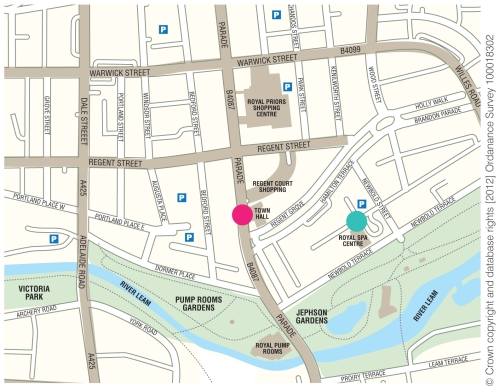