I live in Radford Semele, and my family and I have been environmentally aware for as far back as I can remember, although it has only been in more recent years that I have been able to put this into practise more. 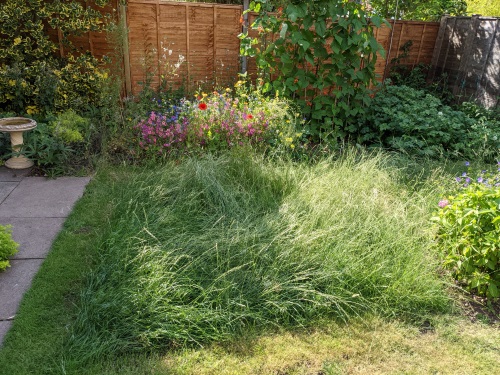 We normally tried to involve the local people, which helped to increase environmental awareness in the general population. I did this for nearly twenty years, when the group stopped in its present form in this area. I am now involved with various similar groups, including Foundry Wood in Leamington Spa once a month. This is a nature reserve on part of the site of Ford’s Foundry in Leamington, and the Children’s’ Forest at Leasowe Farm in Radford Semele.

The Children’s Forest has involved planting and maintaining a four acre site of woodland with native, British trees which when fully grown, will absorb lots of carbon dioxide, produce lots of oxygen and capture lots of pollution particulates each year. Both sites encourage people to volunteer, which helps to generally increase awareness of sustainability.

At home, we have a front and back garden. On both the front and back lawns we have set aside a rectangle of ground which we let grow, with no further mowing, after the initial mowing in the spring. We also scattered some wild flower seeds in there as well. Last year it attracted lots of insects and birds which were feeding off them. I have planted lots of native flowering plants, including cowslips, English bluebells and corn flowers.

One of the large flower beds at the back, after digging over, has been sown with a lot of wild flower seeds and will be left until next spring. Again last year this attracted lots of insects and therefore birds. We also make use of a water butt, filled with rain water, for watering the garden and washing cars. This obviously saves having to use tap water, which uses energy to be purified and delivered. When washing the car it leaves a better finish!

With domestic arrangements we make use of non-packaging shops. There is one in Leamington (Core) which I use a lot. We have containers of liquid hand soap, washing up liquid, fabric conditioner, porridge oats, sugar, loose leaf tea, rice and other things refilled, rather than buying pre-packaged goods in disposable containers - the amount of plastic saved soon adds up! Additionally, I take clean, used jars with lids to them which they then reuse. For a long time, even before it became law, I used reusable shopping bags.

With food I have recently starting using more vegan meats, rather than real meat. Vegan meat uses a lot less energy to produce than real meat. It does actually taste just as good as the real thing, even people whom I have cooked it for admit that. As I say to people, give it a try. If you do not like it, then just go back to the real thing. If I cannot get a vegan alternative, then I try and obtain British meat (the more local the better) from a local butcher.

With dairy products we have starting ordering off the milkman again. He is delivering to the village anyway and the containers which he delivers the milk in are obviously reusable. With milk for a long time I have been using non dairy milk, of which there are a lot of varieties, including hemp, pea, soya, oat and walnut.

With vegan foods do be careful though - some of them are sourced from overseas, so any energy savings with not using animal products are going to be compromised by using more energy to transport it further.

For a long time I have tried to source food stuffs locally. This obviously reduces pollution caused by transporting it. In Wellesbourne market they sell potatoes from a local farm. Whilst at Warwick market they sell locally produced rape seed products, including cooking oil. I drink gin and there are lots of locally produced gins. I have also started using loose leaf tea more as it uses less packaging. For a single cup I use a metal diffuser, which is reusable indefinitely. If used in a pot though, do not forget the tea strainer!

With your spending on groceries in general, I will try and purchase any sustainable/ethical products, rather than other ones. Instant coffee is a good example. For a long time I have also tried to buy UK made products, or failing that (when we used to be a member), EU made products. Whilst this was initially to help protect UK jobs, it also makes sense sustainably.

UK/EU goods do not have to be transported so far and also UK/EU manufacturers also tend to have stricter sustainability laws governing what they do. With there being more tax revenue available to the UK government, with increased UK economic activity, there is also more money available for the sustainability projects that the government wish to finance.

With washing clothes, rather than using the tumble dryer (which we have not used for ages) we use the washing line, letting things finally dry on the clothes horse inside. If things need ironing, they are left out overnight afterwards to finally dry. Things which do not need ironing are left on the radiator overnight. Washing clothes inside out is said to extend the life of them. They certainly do not fade as much, so it is less tempting to buy new ones because your existing ones have lost their good looks!

Clothes which have worn out can often be reused for things such as cleaning cloths. There are also collection points for worn out clothes and shoes (as opposed to wearable ones) in car parks and recycling centres. Do not worry if you put worn out clothes into a wearable clothes receptacle, they are sorted and worn out clothes are collected and sold for recycling.

It is worth collecting any textiles that are worn out, so long as they are clean and dry. They can all be recycled into something. Elastane, for instance (used to make clothes that stretch), can be recycled to be used in vehicle tyres.

Obviously you try and reduce your use of plastic, but what you do use you collect for recycling. Family members from down the road also collect their soft plastic which they pass onto me. Other things collected for recycling include tooth paste tubes and brushes (Mellors the Chemist in Warwick collect them for recycling), stationery (Ryman’s the stationers collect them) and empty blister packs (the dispensary in Superdrug in Leamington collect them).

With transport, when I do use the car, I drive it carefully, so as to reduce fuel consumption. I also do not have a bigger engine than what I need. Combining several journeys into one reduces fuel consumption.

I work on the border of the District and Coventry and on Fridays, the one day of the working week when it is practical, I catch the bus from Radford, into Leamington and catch a further bus from Leamington to my work, then the other way round in the afternoon. So that is one day in the week when I am not using the car.

At work I collect things such as old stationery, tooth paste tubes (which I mentioned earlier), etc,. In addition to the above, which if even if you only start doing one of them (but obviously the more the better!) that is a big help, what can really bring dividends is to spread the word. For instance, if it comes up in conversation, either socially or at work -say what you are doing, emphasising that it is not much trouble, and suggest that they have a go.

If people see you practising what you preach, such as participating in a sustainable activity at work (if it is voluntary, even better!) such as recycling or helping with a green group outside of work, that is a very good way of encouraging people who might be a bit lukewarm. Sharing what you do, say if you have been doing some conservation work, on social media, with a few photographs can be a good way of doing this.

People might not get so fully immersed in sustainability as what you are, but they might start changing their ways a bit and encouraging other people to, which is a good start. Once you get into the habit of living more sustainably, it becomes second nature!