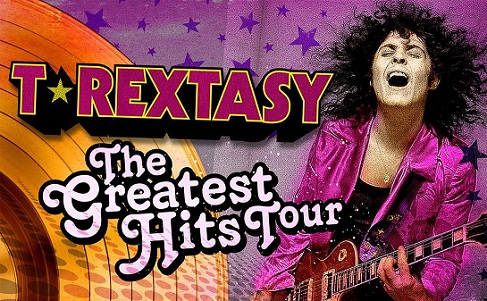 T.Rextasy are the only tribute band to have been authorised and endorsed by Marc Bolan’s catalogue management. The band are now officially recognised as the world’s No.1 group dedicated to the greatest glam rocker of them all, Marc Bolan of T.Rex.

T.Rextasy are now regarded beyond the boundaries of ‘tribute’ and are respected in their own right. The band also have the blessing and support from Marc’s own family and ex-T.Rex band members, including June Bolan (Marc’s wife), Gloria Jones (Marc’s Girlfriend), Rolan Bolan (Marc’s Son), Mickey Finn (T.Rex conga player), Tony Visconti (T.Rex producer) and others.

They have toured worldwide playing at venues such as the gigantic Ariake Coliseum in Japan, and Wembley Arena in London. They also perform alongside artists such as Wizzard, Cockney Rebel, Ian Hunter (Mott the Hoople) and Slade amongst others.