Download and listen to six FREE podcasts that explore the streets of Leamington, Warwick, Kenilworth and Whitnash via two restored Raleigh Magnums.

The lockdown wanderings and restoration projects of two residents has inspired a series of podcast episodes exploring the streets of Leamington, Warwick, Kenilworth and Whitnash.

Forced to keep their walks local throughout most of 2020, Johnathan Branson of Warwick and Craig Spivey of Leamington developed a deeper appreciation of the streetscapes and stories to be found on their doorsteps – but it was after Craig’s restoration of two vintage 1970s Raleigh Magnum road bikes that the new project was born.

“I did up a couple of old bicycles over lockdown, though it had been a long time since I’d done any town riding. Johnathan, who’s a regular cyclist, offered to take me around Leamington as a bit of a refresher. We’d often share exchanges on social media about what was happening locally and on the handful of times we had met professionally, we always ended up discussing what inspired us about the places we lived. I thought it would be fun to try and capture some of that.” - Craig

“It started as a bit of an experiment, which we talk about in episode one. We weren’t sure where any of it was heading or if anyone would tune-in, but listeners encouraged us to make it a regular thing. There are plenty of brilliant art and history podcasts out there, but our USP of visiting and discussing hidden or overlooked stuff on old bikes, combined with half remembered facts seemed like a good idea. We’re certainly having a great time making them.” - Johnathan

Each episode follows the pair as they cycle from place to place on two vintage bikes to discuss a different local points of interest – ranging from unfinished Regency crescents to council houses and chip shops.

As an example, episode one takes in the Leamington filming location for the 2000s reboot of Upstairs Downstairs, The Midland Oak, Lillington’s mid-century library and the Church Of Our Lady built in 1963.

Each episode is between 40 minutes and one hour long and exclusively features music by local songwriter Andy Mort. With downloads quickly reaching into three figures, the pair’s warm and accessible approach to local history soon found fans around the county. All six episodes are available free for anyone to download and listen.

The podcast and an interactive map of their travels can be found on their website. 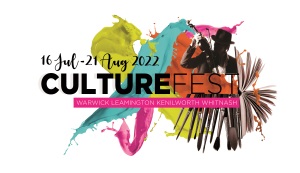