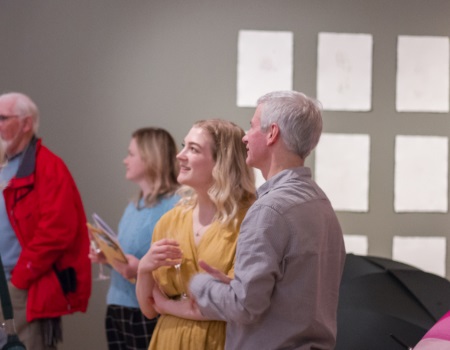 Learn something new on your lunch break. Friday Focus lunchtime talks cover a wide range of topics. Come and discover some of the fascinating facts and stories behind our exhibits.

The talks are informal, start at 1.00pm and last about 25 minutes.
We also occasionally offer more in-depth talks, titled Friday Focus Extra. These events last around one hour.

This talk will consider the work of Freda Lingstrom a British poster artist
who produced works for companies such as the Great Western Railway,
the London Underground, and the Norwegian Railways. It will explore how
Lingstrom’s posters contribute to the ‘poster movement’ happening in
inter-war Britain and will consider the significance of her involvement in
relation to women artists during this time.

Dr. Iain R. Smith is a historian and art lover who lives in Leamington and knew
British printmaker, painter and illustrator, Tessa Beaver and her work. In this
talk Iain reflects on Tessa’s work and also their friendship, including times both
spent as staff at a remarkable African secondary school in 1960s Kenya.

This talk will describe how John’s initial contact with the achievements in painting
and three dimensional art forms during the first half of the twentieth century,
fed into his own work with kinetic objects, printmaking and painting. John will
also present video and other images of his work from the past 20 years.

Curator Lily Crowther introduces the new exhibition and explains how the contemporary artists whose work is featured, were inspired by local stories of making, using and collecting ceramics.

Malin's elegant porcelain vessels are inspired by traditional blue and white pottery. She often enlarges and repeats a detail which was historically used for borders or backgrounds, elevating it to a central feature. Malin's work in 'Making Histories' is based on displays of porcelain in 18th century domestic interiors.

Williams' tactile interactive work encourages touch and play. He is interested in the ways ceramics can move, feel and sound. Williams will introduce the work he has made for 'Making Histories', which allows visitors to make sounds with water, inspired by pre-Columbian Peruvian instruments and medieval watering pots.

Cost: Free, no need to book