In Sickness and In Health: British Art and Medicine, Past and Present - Part Two! 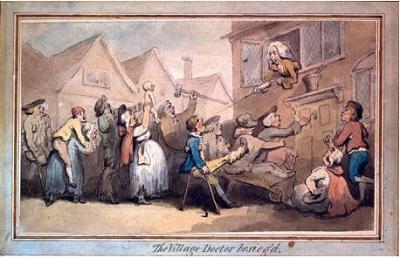 ONLINE LECTURE SERIES! Comprising ten talks between June and October, this series explores the relationship between art, science and medicine.

Please book your free place to any of these lectures to receive a link by email to view online (apart from Talking Subjects and Objects: Catherine Long and Luke Pell in Conversation). Four out of the five talks are streamed live, are 35 mins long with an opportunity to ask questions at the end.

To receive your link to view, please click the 'book' button under the title of each talk.

This talk will be pre-recorded and available to watch on our YouTube channel from Thursday 2nd September.

Catherine Long and Luke Pell are long-term friends and collaborators. As artists they each draw from their daily life experiences, encounters and relationship with others and the world around them, as creative material in their practice.

Catherine has written and recorded an ‘Audio stop’ and wrote this ‘Object label’ for the sculpture as part of the recent process of the re-hanging of the gallery:

Catherine Long is an artist who creatively investigates the issues that her body presents. As one of many people born with an unconventional physicality, Catherine’s aim is to change perceptions of difference and to encourage people to accept their own differences. Through this process of acceptance, we can not only acknowledge parts of ourselves we may want to reject, but also honour those parts of others that we tend to dismiss, judge, or criticize. Marc Quinn made this sculpture of Catherine's body in 2004, as part of a series, as a statement about his reflections on the disparity between the way classical sculptures and real-life bodies are regarded by society.

In this intimate and deeply considered conversation Catherine and Luke will talk together about first-hand and wider issues related to embodiment, objectification and representation and the shifting of positions; perspectives; processes and politics over time.

Alexa will present ‘I’, a series of digitally manipulated photographic self-portraits made in collaboration with people with congenital physical disabilities. She will explain how the work came about, and will show some of her other related works, including , A View From Inside, a more recent series of digitally manipulated portraits made with people who experience psychosis.

Alexa Wright is London based artist working across photography, video, sound, interactive installation, book works and participatory projects. Since the late-1990s, when she became known for ‘After Image’, an award-winning series of photographs of people with phantom limbs, much of Alexa’s research-based practice has featured dialogues with people with physical disabilities and physical or mental health conditions. Her work has been widely shown internationally in festivals such as: FILE, SESI Art Gallery, Sao Paolo, Brazil; DaDaFest International, Liverpool, UK, International Women Artists’ Biennale, Incheon, Korea and Athens Photo Festival, Benaki Museum, Athens. Examples of solo exhibitions include: Toronto Photographers Workshop, Canada; Experimental Arts Foundation, Adelaide, Australia and the Scottish National Portrait Gallery, Edinburgh. Alexa has works in a number of public collections, including the Victoria and Albert Museum, London; The Wellcome Trust and various Universities.

Inherited characteristics; artworks made in response to the genetics that both connect and separate siblings

Jacqueline Donachie is an award-winning Scottish artist based in Glasgow. She is known for a socially-engaged art practice that is rooted in an exploration of individual, family and collective identity and the structures, platforms and spaces (both actual and conceptual) through which it is constructed and supported. Her work encompasses sculpture, installations, photographs, films, drawings and performance and is research-based, collaborative and participatory.

Her recent gallery exhibitions include ‘Deep in The Heart of Your Brain’ at the Gallery of Modern Art in Glasgow (2016), an exhibition that drew wide praise for the manner in which it addressed disability, inheritance and ageing, and Right Here Among Them (2017), a mid-career survey show at the Fruitmarket Gallery in Edinburgh that was the recipient of the inaugural Freelands Award. She has works in many significant national and international public collections, including Tate and the Arts Council Collection. In 2016 she completed a PhD with Northumbria University that examined the capacity for artworks to influence research and care in the field of genetics, continuing a long collaborative engagement with biomedical researchers in both Newcastle and Glasgow.

The current pandemic has brought to the fore the continued associations between epidemic disease and fears of the unknown. My talk will explore how the representation of COVID-19 in the British press recalls the iconography of the cholera epidemics that occurred in Britain in the nineteenth century. Cholera, more than most diseases of the period, inspired intense fear in British society, because of how little was known about it. Images were marshalled to visualize the seemingly invisible and mysterious disease, ultimately highlighting the apparent threat cholera posed to the British body, nation, and Empire. Drawing parallels to COVID-19, my talk will also offer a broader consideration of the role played by media in perpetuating fear and blame.

The title is deceptively simple: as usual, the reality is more complicated. All paintings are by patients in the sense that almost all people have been patients, and artists are people. But are there some particular qualities that one might expect in paintings and other works of art by people whose identity was strongly influenced by their state of health? In considering this question, William Schupbach will review pictures by artists from the 16th to the 20th century, including some famous professional artists, some obscure and untrained amateurs, and others in between. It emerges that there are many reasons for preserving and studying works of art apart from their artistic skill or historical influence.

William Schupbach is a member of the Research Development Team at the Wellcome Collection and has previously held other posts in the Wellcome organisation on Euston Road in London. There he has been involved in acquiring new works for the collection, organizing exhibitions, supporting research in the collection, and building up the online catalogue of the Wellcome collections of prints, drawings, photographs and paintings. He has published on various aspects of historical inconography. For family reasons, he also has a particular fondness for Leamington Spa.